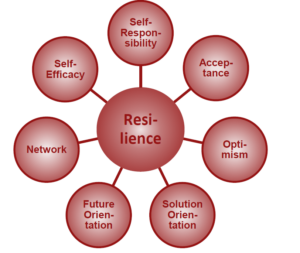 In context of the Corona pandemic and the challenges encompassed by the changes in work enviroment and personal situation, the CRC 1333 started a peer coaching program on resilience in academia for female scientists in 2020. From the end of May through the beginning of September, 2021 this program was suceeded with a second round based on the positive feedback of the participants and the positive effects those dedicated group meetings also had on expanding networks of female CRC researchers.

In six modules taking place roughly every three weeks the participants met in dedicated groups of 3-4 members. Some of the meetings were accompanied by a professional coach others were organized and lead by the groups themselves based on provided materials.

Each module focused on one resilience factor and began in the first few minutes with a “Mindful Check-In”. This describes a mindfulness exercise to help ground the participants and allow them to fully focus on the seminar. This was followed by a brief discussion. The sessions ended with an exercise which can be incorporated into everyday life outside of coaching to reinforce the topics learned. In addition, the program also provided regular opportunities for collegial peer coaching within the groups and further introduced this very effective method of conflict resolution to the reseacrhers.

The following topics were covered in the modules: