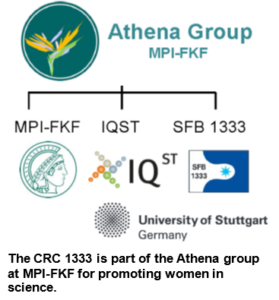 Mentoring and networking are invaluable tools for promoting junior talent. Therefore, the CRC 1333 was very happy to join the Athena group of Max-Planck Institute for Solid State Research (MPI-FKF) in early 2019. Therein, the CRC 1333 has co-initiated a subject-specific mentoring program for female early career researchers in chemistry, materials sciences and physics and we can provide our researchers with additional opportunities for networking.

The Athena Group of the MPI-FKF was launched in 2018 to foster exchange among female scientists and support women in science. The group is a local multi-career-level network that benefits from a bottom-up approach, i.e. from the involvement and commitment of all members (regardless of gender), who are interested in supporting female scientists.

The CRC 1333 joined the group by invitation of our deputy spokesperson Prof. Bettina Lotsch, director at MPI-FKF and co-founder of Athena-FKF. Besides the CRC 1333, also another close collaboration partner of MPI-FKF is part of the group: the “Center for Integrated Quantum Science and Technology” (IQST) which provides the opportunity for vivid exchange and networking between the different research communities.

Our mentoring program is a platform tailored to the particular needs of the female scientists in chemistry, materials sciences and physics. Female scientists of all levels up to junior group leaders can receive individualized support for their personal and career development by a mentor. Mentors of both genders and preferably one step ahead of their mentee in their careers are chosen from a large pool of possible candidates from MPI-FKF, CRC 1333 and IQST. The mentorship pairs are matched based on a mentoring survey that helps the mentoring team to find the most suitable match. From the CRC 1333 team, three early career researchers

Researchers of all genders can join the Athena-FKF monthly themed networking coffee breaks. In these informal discussion rounds a wide range of topics are being covered including career paths and relevant issues according to personal experiences in academia. Some exemplary topics were:
How do you attribute your success? – Test your level of Imposture Syndrome! (incl survey)
Implicit Bias – guilty or not guilty? (incl. survey)
Do you take your Laptop on vacation? – Are you happy with your work life balance?
The Gender Quota
Mentoring

The coffee breaks took place every first Friday of the month until the COVID-19 pandemic unfortunately put a temporary break to this practice.

The Athena Group of MPI-FKF organizes a series of seminars by successful and inspiring role models in science and industry to talk about their research and share personal experiences with career development and mentoring students/employees. After the talks, all attendees have the opportunity to interact with the speaker in an informal setting.